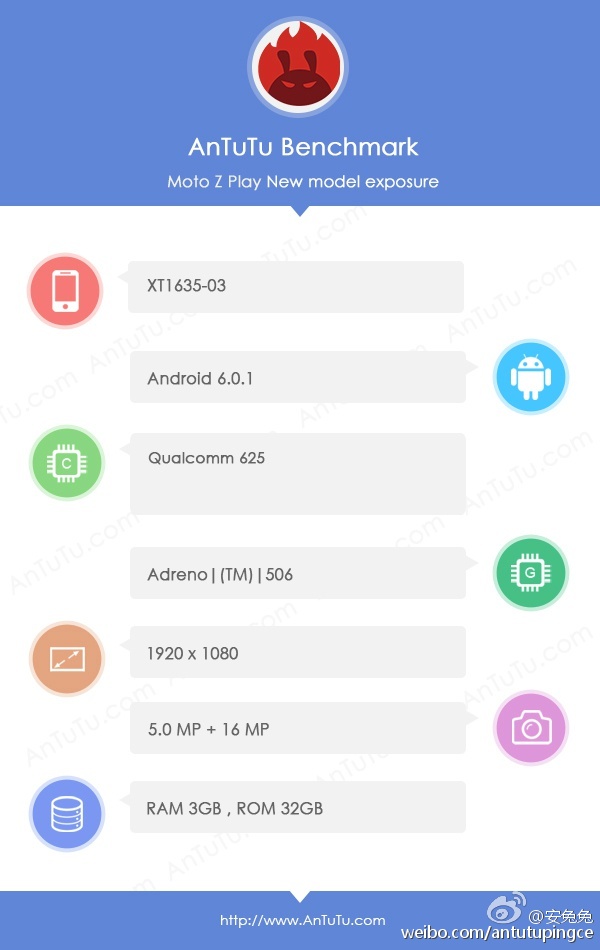 Motorola is going to launch the variant of the Moto Z called the Moto Z Play soon, the company has already announced the Moto Z and Moto Z Force with top-end features and display with Moto mods support as well. The Moto Z Play will be the third smartphone of the new Moto Z family. Moto Z Play was previously spotted GeekBench running the Snapdragon 625 processor and Android 6.0.1 marshmallow OS, and now the device is spotted at AnTuTu listing as well.

The AnTuTu listing lists the Moto Z Play device with model number XT1635-03 and comes with a full HD 1920×1080 pixel resolution display. It is powered by the Snapdragon 625 SoC with Adreno 506 GPU and comes with 3GB of RAM. It has 32GB of inbuilt storage capacity and will have a expandable storage slot as well. it features a 16-megapixel rear camera and a 5-megapixel front facing camera. it runs on the Android 6.0.1 marshmallow OS out of the box.

The GeekBench listing revealed previously that it will have a 2.02 GHz Snapdragon 625 octa-core processor along with 3GB of RAM. It runs on the Android 6.0.1 marshmallow OS out of the box and there were no other details listed in its GeekBench listing. The device will support Qualcomm Quick Charge 3.0 feature and will support LTE Cat 7 bands and integrated X9 LTE.

Moto Z Play code named Motorola Vertex was also spotted listed to India via the Indian import/export website Zauba. It was listed with price tag INR 5,274 (around $78) that may be higher at the time of its official launch. The rumored specs of the Moto Z Play includes a 5.5-inch full-HD display and will be powered by a Snapdragon 625 SoC with 3GB of RAM. It will have 16GB and 32GB storage options and will be backed up by a 3600mAh battery. It will feature a 13-megapixel rear camera with LED flash and a 5-megapixel front facing camera. It will also have a support for Pro Camera Mod that comes with a new camera lens with 10x optical zoom, f/3.4-5.6 aperture, and a xenon flash features.