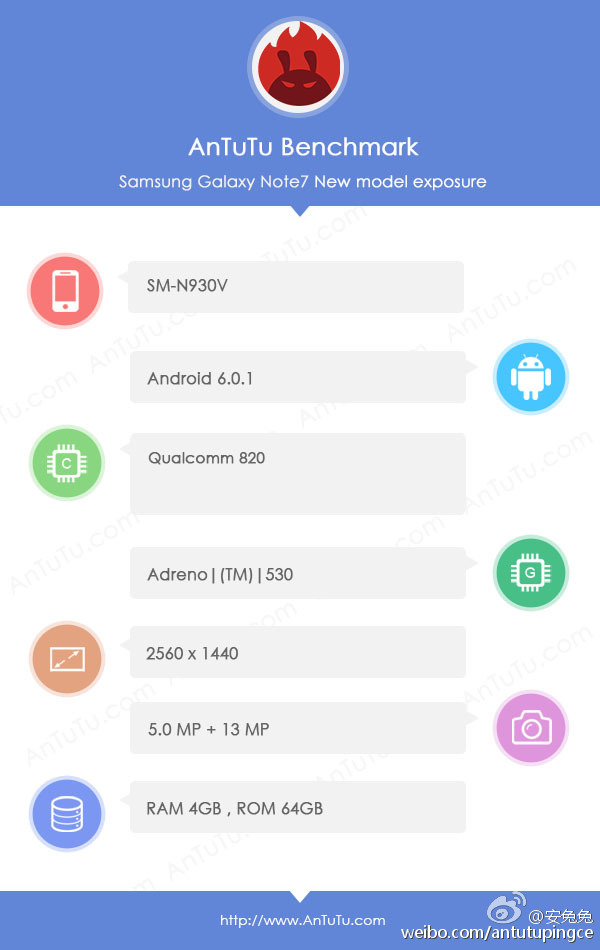 The Samsung Galaxy Note 7 is listed at AnTuTu with a qHD display resolution of 2560 x 1440 pixels and is having the model number SM-N930V. It runs on the Android 6.0.1 Marshmallow OS out of the box and comes with the Qualcomm Snapdragon 820 processor with Adreno 530 GPU. It has 4GB of RAM and 64GB inbuilt storage slot as well. It features a 13-megapixel rear LED flash camera and a 5-megapixel front facing camera.

On Geekbench, the Samsung Galaxy Note 7 is listed with model number SM-N930F and is powered by a 1.50 GHz
octa-core Exynos 7420 processor with 3GB of RAM and runs on Android 7.0 Nougat out of the box. It scored 909 points in single core test and 3768 points in the multi-core test. No other details about the device were listed in the GeekBench listing.

Previous rumors confirms that the Galaxy Note 7 will have a 5.8-inch display and will feature a 25-megapixel rear camera with a 16-megapixel front facing camera. A 64-bit Kryo 2.6GHz quad-core Snapdragon 823 processor (also known as Snapdragon 821) under the hood along with the Adreno 530 GPU or the Exynos 8893 processor. It will have 6GB of RAM with support of Dual SIM and will feature an iris scanner. It will also have an upgraded battery of 3500 mAh and fast charging feature.