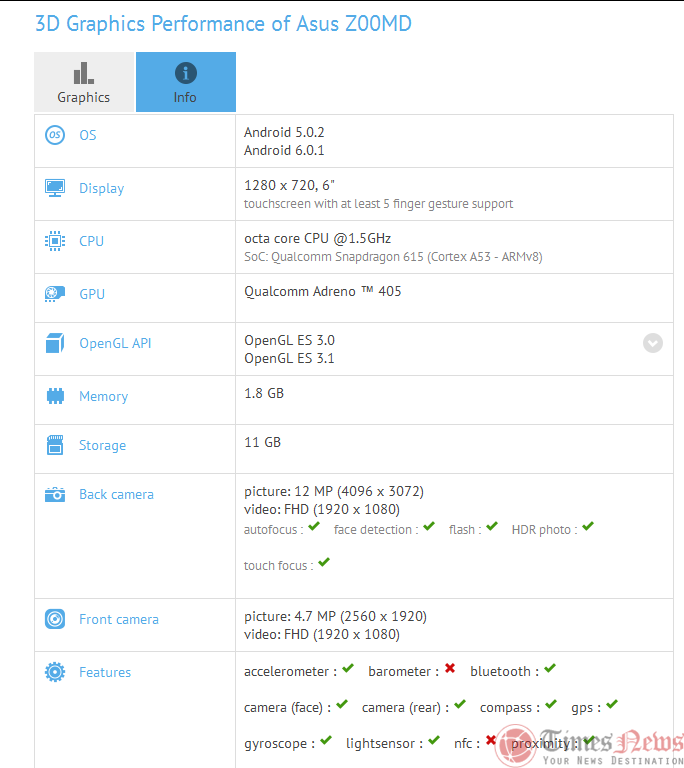 A new Asus phablet Asus Z00MD with large 6-inch display has just appeared in the GFXBench database revealing the specifications. The Asus Z00MD looks to be a new variant of the Asus Zenfone 2 laser smartphone that was launched with Snapdragon 410 processor. In January, Asus P008 tablet was listed in GFXbench database giving us the details of its specs.

The GFXBench database listing for the Asus Z00MD includes a phablet category display size of 6-inches with 1280 x 720 pixels resolution. It is powered by the Qualcomm Snapdragon 615 (Cortex A53 – ARMv8) processor with Qualcomm Adreno 405 GPU. The GFXbench listing shows two Android versions Android 5.0.2 and Android 6.0.1 OS out of the box. It comes with 2GB of RAM and 16 GB inbuilt storage.

It features a 12-megapixel rear camera and a 5-megapixel front facing camera. Both the cameras are capable of recording full HD videos. It comes with GPS, WiFi and supports single SIM but it doesn’t support NFC feature as per the listing. The pricing and availability details of this phablet will be confined once an official announcement is made by the company.

Asus has recently made available the Asus Zenfone Zoom smartphone that comes with exciting specification and 3x optical zoom with 13-megapixel rear camera and was up for pre-orders from January 20 in the US. The specs of the Zenfone Zoom includes a 5.5-inch (1920 x 1080 pixels) display with Corning Gorilla Glass 4 protection and is equipped with the 2.5GHz quad-core Intel Atom Z3590 processor with PowerVR G6430 GPU. Other specs includes 4GB LPDDR3 RAM, 128GB internal storage, expandable storage up to 128GB via micro SD card, Android 5.0 Lollipop OS, 13MP rear camera with Real Tone flash, 5MP front-facing camera, 3000mAh battery and 4G LTE support.

The MWC 2016 event is just a few weeks away and we may see an announcement from Asus sooner or later before the MWC event that is going to be held between 21st to 25th February in Barcelona, Spain.