Acer Jade Primo With Android 6.0 and 3GB of RAM listed on GFXBench 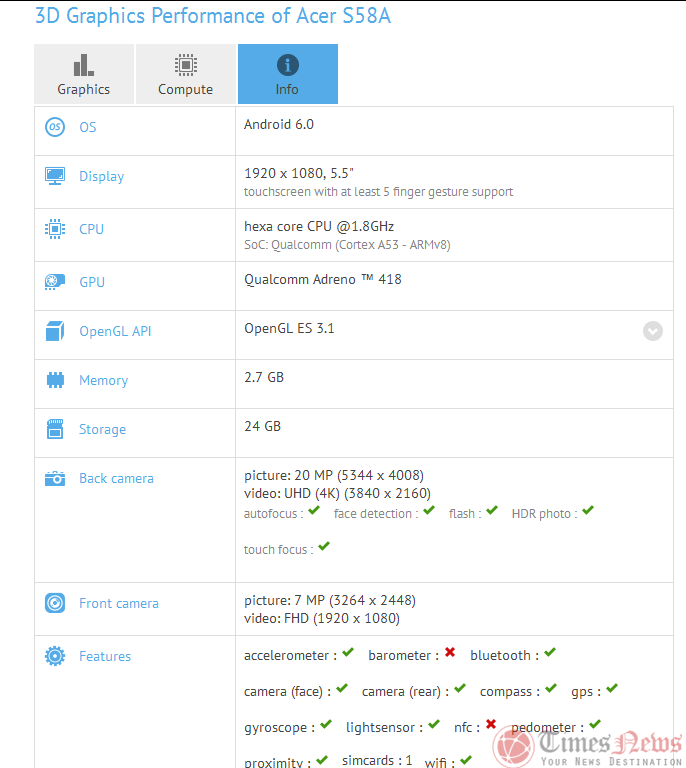 There were reports recently that Acer is working on an Android variant of the Acer Jade Primo smartphone that previously has a model with the Windows 10 mobile OS and has model number Acer S58. A new Android powered device with model name Acer S58A has been spotted recently on Geekbench browser benchmarking website and is said to be the Android powered Acer Jade Primo smartphone. Now the Acer Jade Primo with model name Acer S58A has been listed in the GFXBench database giving some more details of its specifications.

On Geekbench, the Acer Jade Primo (Acer S58A) was spotted with specifications like Android 6.0 Marshmallow OS out of the box and is powered by a hexa-core Snapdragon 808 chipset with 3GB of RAM. No other details were available in the geekbench testing database like the display size, battery size, storage details and other important details. Out of these, the GFXBench listing doesn’t have the battery details of the device but has all other details.

The GFXBench listing of the device has provided more details about this device like a 5.5-inch display having 1920 x 1080 pixels resolution. It is powered by a 1.8GHz hexa core Snapdragon 808 processor along with 3GB of RAM and Qualcomm Adreno 418 GPU and 32GB of inbuilt storage capacity. It features a 20-megapixel rear camera and an 8-megapixel front facing camera. The rear camera is capable of recording 4k videos as per the listing.

Other features GFXBench lists are Bluetooth, GPS, NFC, WiFi and single SIM support. No other details are available in the GFXBench for the Acer Jade Primo (Acer S58A). None of the above details are officially confirmed by the company itself, so take these details with a pinch of salt. The device is expected to launch in the MWC 2016 event going to be held next month from February 22 to February 25.