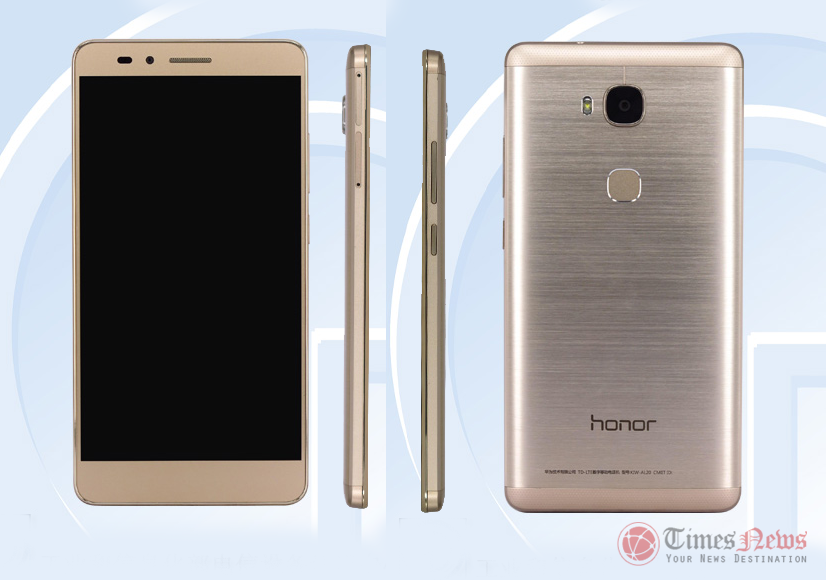 Huawei Honor 7 was launched in October by Huawei in India that comes with top-end specs. A new Huawei phone has just got the TENAA approval in China with model name KIW-AL20. Huawei will launch it as Huawei Honor 7X, Huawei Honor 7 Plus or may be with name Huawei Honor 8 in the upcoming days. The TENAA listing for the Huawei KIW-AL20 confirms the specifications of the new phone and also comes with the images of the device.

The TENAA listing for Huawei Honor 7X confirms the specifications that includes a 5.5-inche TFT Full HD display with 1920 × 1080 pixel resolution. It is powered by the 1.5GHz octa-core processor (will be the 64-bit Kirin 950 Chipset) with 3GB of RAM. It has 32GB inbuilt storage with up to 128GB expandable storage slot. The phone runs on Android 5.1.1 Lollipop OS out of the box.

The Honor 7X features a 13-megapixel rear camera with dual-LED flash and a 5-megapixel front facing camera is also on board. The battery size is not confirmed from the TENAA listing of the device but we can expect a 3100+ mAh battery on this device. It supports 4G LTE, Bluetooth, USB, FM Radio, GPS, 3G, 2G etc connectivity features. It measures 151.3 × 76.3 × 8.15 mm which confirms that it will be more slimmer than the Honor 7. It weights just 158 gms. Color options includes Gold, Grey and Silver. The TENAA listing also confirms a metal build and a fingerprint scanner at the back below the camera module.

To recall, honor 7 was launched with smaller display of 5.2 inch as compared with this new device that surfaced on TENAA with 5.5-inch display. Honor 7 is powered by the Octa-core Hisilicon Kirin 935 CPU (4xA53 at 2.2GHz + 4xA53 at 1.5GHz) along with Mali-T628 MP4 GPU. It features a 20 MP rear dual-LED flash camera with an 8MP front facing camera. It has 16 GB inbuilt storage with microSD card expandable storage up to 128 GB. It has 3 GB of RAM. It has a 3100mAh Battery.