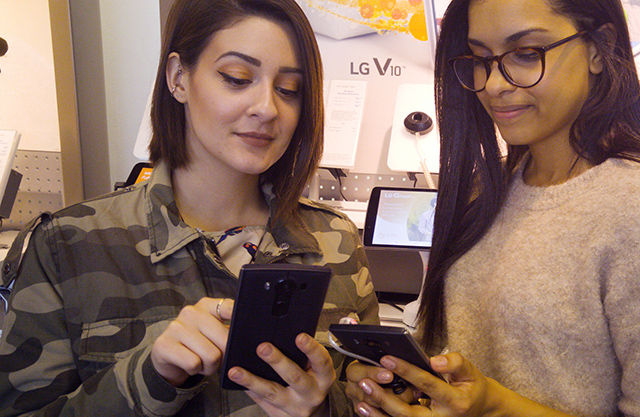 Today, in an official announcement, LG announced that more than 450,000 units of the company’s smartphone LG V10 have been sold out in the United States in the past 45 days after its launch setting up a new record. LG V10 was launched at October end in the US and was available for sale with major US carriers in early November. LG also claimed that average 10,000 units per day were sold in the United States with the selling rate of one device in about 9 seconds. The V10 was most popular in the youth of age between 25-34.

The V10 is gaining popularity among the US youth because of the “video expert mode” feature available in the device that helps anyone to easily create and share favorite videos on SNS (Social Networking Service). LG V10 comes with high-end specifications and Dual display with a large 5.7-inch display and a secondary 2.1-inch IPS Quantum display above the main display which is also attracting the customers in US.

To recall, the LG V10 comes with a 5.7-inch QHD IPS Quantum display with 1440×2560 pixels resolution and is powered by a 1.8 GHz hexa-core Snapdragon 808 processor with Adreno 418 GPU and 4 GB of RAM. It comes with 64GB internal memory and expandable storage up to 2TB with microSD card. It runs on Android 5.1.1 Lollipop OS out of the box. LG V10 features a 16-megapixel rear camera with OIS 2.0, F1.8 aperture, LED Flash, Laser AF and 4K video recording features. A 5-megapixel dual lens front facing camera is also on board.

The V10 is equipped with the fingerprint sensor at the back below the camera module. It comes with a 3,000mAh removable battery with Quick Charge 2.0 feature and connectivity options includes 4G LTE, 3G HSPA+, WiFi, Bluetooth 4.1, GPS, NFC and Slim Port. It is available in Space Black, Luxe White, Modern Beige, Ocean Blue and Opal Blue color variants.