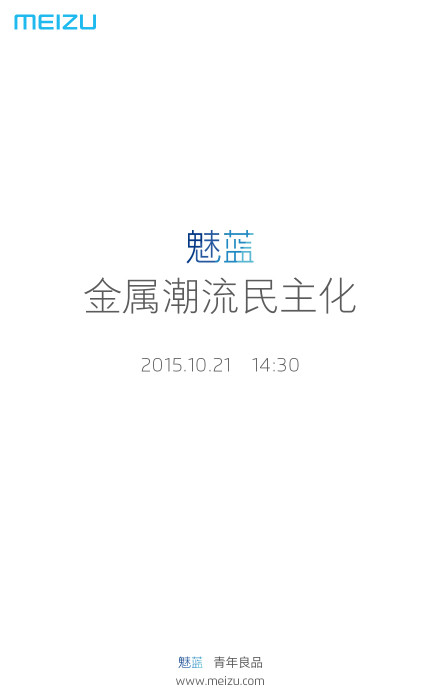 We recently saw the launch of Meizu flagship device called the Meizu Pro 5 and just after its launch, nearly a month ago, get ready to see another new phone launch on 21st October from Meizu. Chinese manufacturer has started sending the invites for its October 21 event to be held in China.

Meizu has posted a teaser image on its Weibo account that comes with the event date and time 14:30 with text written in Chinese language. The event invitation from the Meizu website reads as,” In the new era, With Yen value arrogance beings. I love the grip, Lively youth of color, Experience smooth burst table, But also ______? Metal trend of democratization” if we translate it. So, most likely, a phone with metal body will be launched.

Most probably, Meizu will launch the Meizu M3 Note, which will be the addition to the Meizu’s Blue Charm family, in this event. Another possibility is the launch of the new Meizu M57A smartphone that we recently saw in the Chinese certifications site TENAA with full specifications and running YunOS 3.1.6 instead of Android. It was also seen listed on the China’s 3C certifications website.

If we talk about the Meizu M3 Note, it is rumored to have a 5.5-inch 1080p full HD display with 2.5D glass. It will be powered by a 2GHz octa-core processor with 2GB RAM and 32GB of expandable storage. It will feature a 13-megapixel rear camera and a 5-megapixel front facing camera. Just like Meizu M57A, it will also run the YunOS 3.1.6 OS.