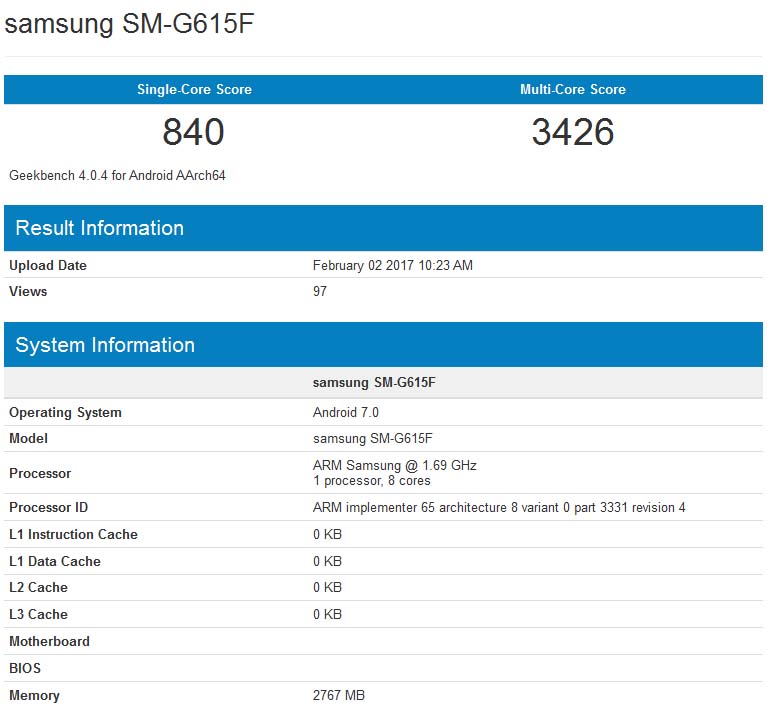 While we are looking for the launch of the next Samsung Galaxy S series flagship Galaxy S8 and S8 Edge, a new device from Samsung with model number SM-G615F have been spotted listed some benchmark websites that shows mid-range specifications for the device. The device is listed at GFXbench and Geekbench with the same model number. This device comes with FHD display and is powered by a MediaTek or Exynos processor. It comes with a 12-megapixel camera on rear and front panel. Let’s checkout the specifications of the device on both the benchmark databases.

At Geekbench, the Samsung SM-G615F is listed with a 1.69 GHz octa-core Exynos processor along with 3GB of RAM and it runs on the Android 7.0 Nougat OS out of the box. It scored 840 points in the single-core test and 3426 points in the multi-core test. No other details about the device are currently available in the Geekbench benchmark test. The GFXBench listing of the device however, comes with different processor from the Geekbench listing of the device.

The GFXBench listing shows that the Samsung SM-G615F is listed with a 5.7-inch full HD display with 1920 x 1080 pixels resolution and is powered by a octa-core 2.3GHz MediaTek Helio P20 MT6757 (Cortex A53 – ARMv8) processor that comes with a ARM Mali-T880 MP2 (dual core) GPU. It has 3GB RAM available along with 32GB inbuilt storage capacity. It runs on the Android 7.0 Nougat OS out of the box. It features a 12-megapixel LED flash camera on the rear side and a 12-megapixel camera on the front panel.

There are no details available about this device that with what name it will be launched in the future, but as the Galaxy On7 Pro comes with the model number SM-G600F, we can expect that the company will launch it with the name Galaxy On7 Pro (2017) soon. To recall, the Galaxy On7 Pro was announced with a 5.5-inch HD (1280 x 720 pixels) IPS display with a 1.2 GHz quad-core Snapdragon 410 (MSM8916) processor along with Adreno 306 GPU. Other specs includes a 2GB of RAM, 16GB internal storage, a 128GB microSD expandable storage card slot, Android 6.0 Marshmallow, a 3000 mAh battery, a 13-megapixel rear camera LED flash with f/2.2 aperture, a 5-megapixel selfie camera, Dual SIM and 4G with VoLTE.