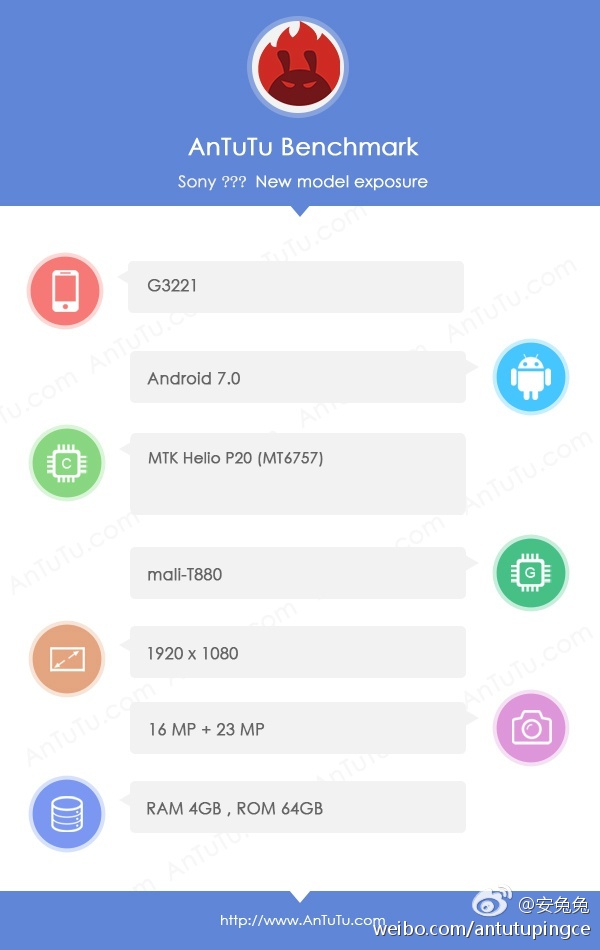 A new Sony device has just hit the AnTuTu benchmark database leaking some of the specifications of the device. The device is listed with model number Sony G3221 but comes with different model numbers that were spotted in User agent profiles on official Sony website including Sony G3121 and G3112. We can expect that Sony will announce new Xperia flagships at the MWC 2017 event next month at Barcelona and we are still awaiting the Sony’s announcement regarding their MWC event that might not be too far from now.

The AnTuTu listing lists the Sony G3221 that is currently listed at Sony website in a user-agent profile as well. The AnTuTu benchmarks lists this device with a full-HD display with 1920 x 1080 pixel resolution. It is powered by a MediaTek Helio P20 (MT6757) processor that comes with a Mali-T880 GPU. It comes with 4GB of RAM and 64GB inbuilt storage capacity and runs on the Android 7.0 Nougat OS out of the box. Further, it is listed with a 23-megapixel rear camera that will be having a LED flash and a 16-megapixel camera is available on the front panel of the device. No other details about the device are currently available in the AnTuTu benchmark.

The Sony phones were previously spotted with model numbers G3121 and G3112 in UA-profiles and the documents revealed that both these models will be powered by 2.3GHz octa-core MediaTek MT6757 Helio P20 processor that also comes with Mali-T880 GPU. The leaked UA-profiles also confirmed that the  Sony G3112 will feature a 1280 x 720 pixels HD display while the G3221 will have a 1080 x 1920 pixels full-HD display. So we may expect that the Sony G3221 and Sony G3121 will be the high end smartphones and might be the Xperia XA Ultra successors, while the Sony G3112 will be some other mid-range device.