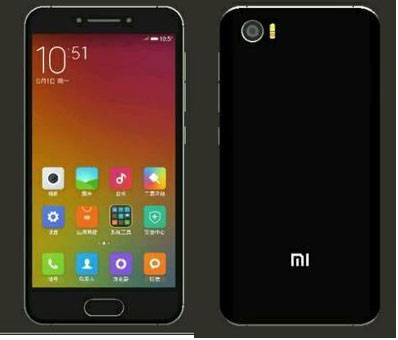 Chinese Xiaomi launched their flagship devices Xiaomi Mi 5s and Mi 5S Plus in China in September with high-end specifications and premium design. The devices comes with affordable price tags in China with Mi 5S costing around $300 and Mi 5S plus around $344 and are yet to hit the global markets. The company is now spotted working on a new device Xiaomi Mi S that might be the mini variant of the Mi 5S smartphone. A weibo user has shared some of the images of the device along with the specifications. Let’s checkout the leaked images of the device.

The leakster posted a number of images from the device and confirms that this Xiaomi Mi S device will have a 4.6-inch 2.5D glass display with 1920 x 1080 pixel resolution instead of a 5.15-inch display. It will be powered by a 2.35GHz Quad-Core Snapdragon 821 64-bit processor with Adreno 530 GPU that also powers the Xiaomi Mi 5S and 5s Plus. This device will have 4GB of LPDDR4RAM and 128GB UFS 2.0 internal storage capacity.

There is no mention of the OS but we can expect it to launch with Android 6.0 (Marshmallow) based MIUI 8 or the newly released MIUI based on Android Nougat 7.0 that is currently rolling out to the Mi 5 smartphone. The camera features for this device includes a 12-megapixel Sony IMX378 sensor along with f2.0 aperture, 80° viewing angle, PDAF, HDR, 4k recording capability and other features. The device will feature a 4-megapixel front facing camera with f2.0 aperture.

The leakster further confirms that the Xiaomi Mi S will be powered by a 2600mAh battery with Quick Charge 3.0 feature. The device will have the connectivity options like 4G+, 4G LTE with VoLTE, NFC, USB Type-C port, 3.5mm headphone jack, GPS/AGPS/Glonass and other options as well. It measures 128.3 x 64.2 x 8.2mm. There are no details available when will the company launch this device and the details about its price are also not available. So we have to wait for the official confirmation for more details on this device.