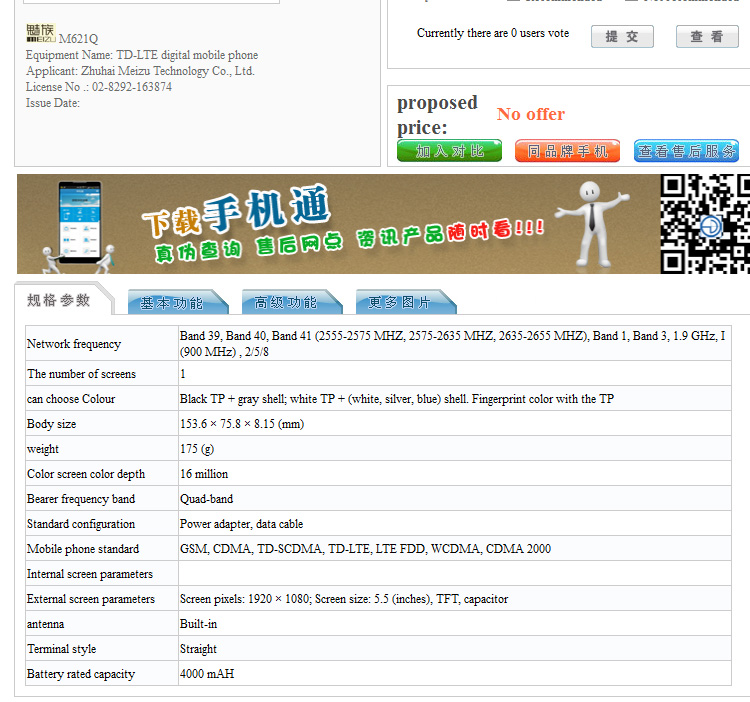 The Meizu m5 Note will be the successor to the Meizu m3 Note. The Meizu m5 Note is listed at TENAA with a 5.5-inch TFT full-HD display with 1920 × 1080 pixel resolution and is powered by a 1.8 GHz octa-core processor that might be the MediaTek Helio P10 octa-core processor. It has 2GB, 3GB and 4GB of RAM and 16GB/32GB/64GB inbuilt storage options with up to 128GB expandable storage capacity. It runs on the Android 6.0 Marshmallow OS out of the box and might support dual-SIM.

The Meizu M5 Note features a 13-megapixel rear camera with LED flash and a 5-megapixel front facing camera. The model M621Q comes with a 4000mAh battery while the other two model numbers are powered by a 3920mAh battery. So it will be a 4000mAh battery at the time of its launch. It comes with connectivity options like 4G LTE with VoLTE, Bluetooth, GPS, WiFi, Micro-USB and others. It measures 153.6 × 75.8 × 8.15 mm and weights 175 grams. It comes with Black and White color option.

The Meizu M5 Note was previously spotted at AnTuTu and Geekbench with some of the specs listed. At AnTuTu, it was listed with a full-HD display with 1920 x 1080 pixel resolution display and is powered by a Mediatek Helio P10 processor (MT6755M) having the Mali-T860 GPU with 3GB RAM and 32GB inbuilt storage capacity that might be available with expandable storage slot. It runs on the Android 6.0 Marshmallow OS out of the box. It features a 13-megapixel rear camera with LED flash and a 5-megapixel front facing camera.

The GeekBench listing lists the Meizu M5 Note with a MediaTek Helio P10 (MT6755M) 1GHz octa-core processor. It comes with 3GB of RAM and runs out of the box on the Android 6.0 Marshmallow OS. It scored 687 points in the single-core test and 2481 points in the multi-core test. No other details from the device specifications are listed at the Geekbench listing of the device.