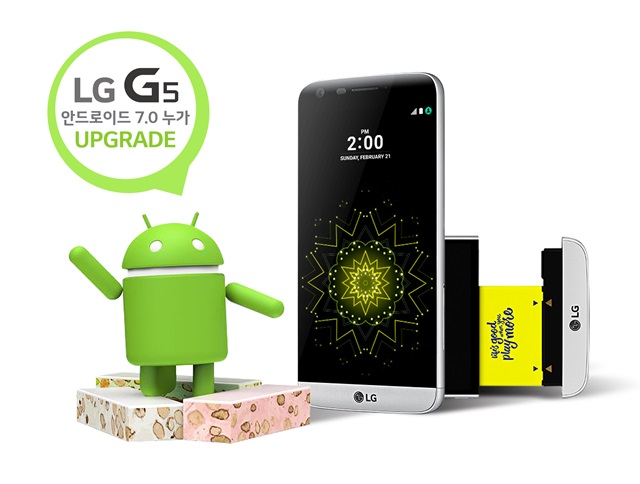 LG has started seeding the Android 7.0 Nougat update to its latest flagship LG G5 in the home country of South Korea. The update will follow the LG G5 devices in the other regions including the America and Asia in the upcoming weeks. The company confirmed the Android Nougat update rollout via an official blog post. “Most G5 users will receive notifications on their phones when the update is available. More information will become available locally in the weeks ahead,” said the company in an official statement.

In August, the company announced the Nougat preview program for the 2000 LG G5 users to test out the early build of the Android Nougat. The Nougat update for the LG G5 comes with several new features such as In Apps, Multi-Window, new notifications panel, new emoji and other new features including the security features as well.

“Getting software updates to our users faster than the competition is our way of demonstrating that LG is committed to supporting our products and customers to ensure they have a positive ownership experience,” says senior Vice-President and Head of Research and Development at LG Mobile Mr. Kim Hyung-jung.

The LG G5 smartphone was announced back in the MWC event in February this year with features such as a 5.3-inch Quad-HD display with 2560 x 1440 pixel resolution and Always On feature and 3D Arc Glass. It is powered by the latest Quad-Core Snapdragon 820 64-bit processor with Adreno 530 GPU. It comes with 4 GB of RAM and 32GB of UFS internal storage capacity that is expandable up to 2TB with the help of MicroSD card.

It was launched running the Android 6.0.1 Marshmallow OS out of the box with LG’s own streamlined UI on top. The device features a Dual camera setup on the rear side with 16-megapixel rear camera with laser auto focus, dual-tone flash, 4K video recording and an 8-megapixel secondary rear camera with 135-degree wide-angle lens. An 8-megapixel front facing camera is also available.

It comes with a removable 2,800 mAh battery that comes with Quick Charge 3.0 technology that helps improving charging speed by 27% and efficiency by 45% and comes with 4G LTE, WiFi 802.11 a/b/g/n/ac (dual-band), Bluetooth 4.2, GPS, NFC, USB Type-C connectivity options. It also comes with a fingerprint sensor available below the Dual camera module and an Infrared sensor. It will be available in Silver, Titan, Gold and Pink color options. It is 7.5mm-8mm thick and weights 159 grams.