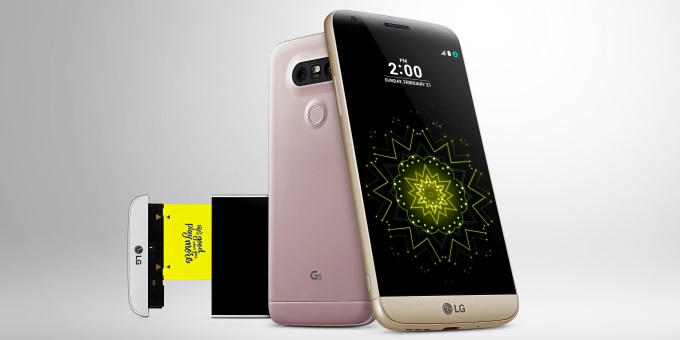 Finally, the LG’s flagship device LG G5 has been announced by LG in the MWC event at Barcelona today. The LG G5 was a subject of a number of leaks online and most recently leaked with its rear panel having the Dual camera setup and fingerprint scanner yesterday. The actual LG G5 rear panel is as same as it was leaked yesterday. The new LG G5 comes with a comparatively smaller display than that of LG G4 and LG G3. It runs the latest Snapdragon 820 chipset and boosts 4GB RAM. Let’s discuss the features of the device in brief.

The LG G5 comes with a 5.3-inch Quad-HD display with 2560 x 1440 pixel resolution and Always On feature and 3D Arc Glass. It is powered by the latest Quad-Core Snapdragon 820 64-bit processor with Adreno 530 GPU. It comes with 4 GB of RAM and 32GB of UFS internal storage capacity that is expandable up to 2TB with the help of MicroSD card.

It runs on Android 6.0.1 Marshmallow OS out of the box with LG’s own streamlined UI on top. The device features a Dual camera setup on the rear side with 16-megapixel rear camera with laser auto focus, dual-tone flash, 4K video recording and an 8-megapixel secondary rear camera with 135-degree wide-angle lens. An 8-megapixel front facing camera is also available.

It comes with a removable 2,800 mAh battery that comes with Quick Charge 3.0 technology that helps improving charging speed by 27% and efficiency by 45% and comes with 4G LTE, WiFi 802.11 a/b/g/n/ac (dual-band), Bluetooth 4.2, GPS, NFC, USB Type-C connectivity options. It also comes with a fingerprint sensor available below the Dual camera module and an Infrared sensor. It will be available in Silver, Titan, Gold and Pink color options. It is 7.5mm-8mm thick and weights 159 grams.

LG G5 comes with ‘LG Friends’ like 360 CAM, 360 VR, Rolling Bot, Tone Platinum, Smart Controller and H3 by B&O Play earphones. The 360 CAM comes with two 13-megapixel wide angle cameras, a built-in 1,200mAh battery, 4GB of internal memory and a manual mode. The 360 VR virtual reality headset can be connected to the LG G5. The Rolling Bot is a  ball camera that rolls around capturing images and videos with its embedded 8MP camera connectable via Wi-Fi.

LG hasn’t revealed any pricing and availability details of the LG G5 and the device is expected to be priced between $600-$700 as per the rumors. Some reports says that the LG G5 will be available in early April.