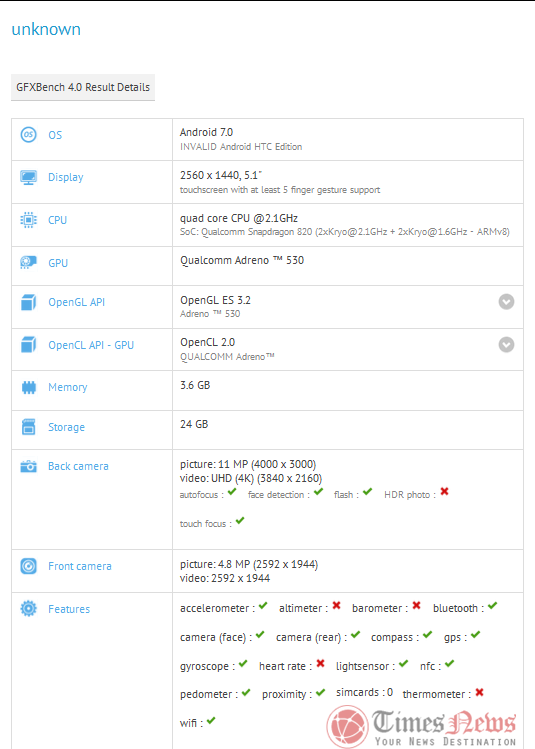 HTC has already confirmed that it will roll out the Android Nougat 7.0 update to its number of devices including unlocked HTC 10, HTC One M9 and HTC One A9 smartphones. HTC has previously confirmed that HTC 10 will receive the Nougat update in the fourth quarter of 2016 and now HTC 10 have been spotted listed at GFXBench with Android 7.0 Nougat OS that confirms that the rollout of the Nougat update is soon going to start.

The GFXBench listing lists the HTC 10 with 5.1-inch qHD display with 2560 x 1440 pixel resolution and quad core 2.1GHz Qualcomm Snapdragon 820 processor with Adreno 530 GPU. It comes with 4GB RAM and 32GB inbuilt storage capacity. It features a 12-megapixel rear and a 5-megapixel front facing camera. The operating system is listed as Android 7.0 with INVALID Android HTC Edition, that confirms that it is the HTC 10 flagship running the Nougat OS.

The HTC 10 was launched in April this year with features such as a 5.2-inch quad HD Super LCD 5 display with 2.5D Gorilla Glass and 1440 x 2560 pixels resolution and is powered by the quad-core Qualcomm Snapdragon 820 64-bit processor with Adreno 530 GPU and 4GB of RAM. It comes with 32/64GB internal storage options and expandable storage up to 2TB with microSD card. It runs on the Android 6.0 Marshmallow with HTC Sense 8.0 UI.

It features a 12-megapixel Ultrapixel 2 camera with dual-tone LED flash, 1.55um pixels, f/1.8 aperture, Laser AF, OIS and 4K video recording features. It also houses a 5-megapixel autofocus front-facing camera with 1.34um pixels, f/1.8 aperture, OIS,  23mm focal length and 86-degree wide angle. It is backed up by a 3000mAh battery with Quick Charge 3.0 feature that can charge the battery up to 50% in just 30 minutes and offers up to 2 days of battery life with normal use.

There is no news available when in the Q4, the company will start the rollout of the Android 7.0 Nougat to HTC 10 and One M9 & One A9 smartphones, we have to wait for the company now for more information about this.