Xiaomi Releasing the Mi 5s on September 27, Poster out! 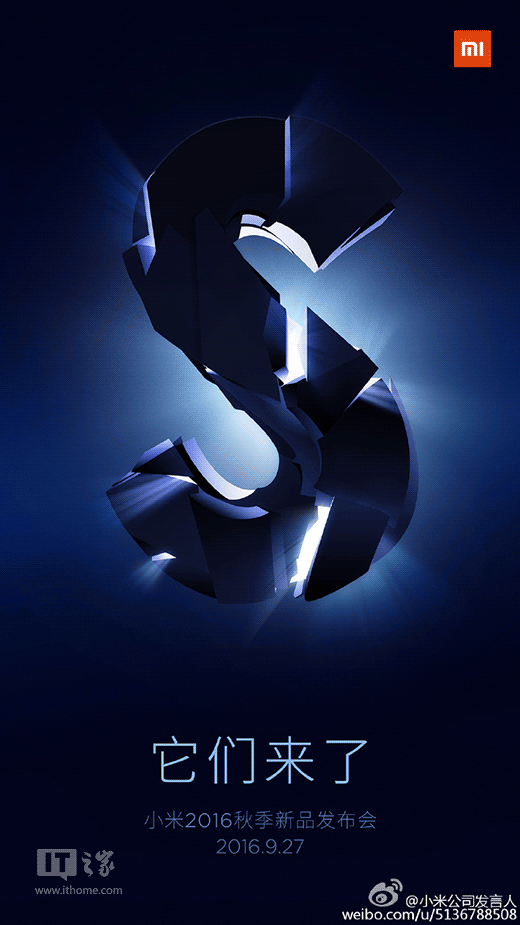 Chinese tech giant Xiaomi has finally announced a news conference slated to take place on September 27 where it would unveil ‘a wave of new products”. The company dubbed the “Apple of China” has released a posted today to that effect and the poster contained one important clue which points to the likely debut of the much touted Xiaomi Mi 5s on the said date.

The poster featured a huge letter “S”, written very bold and this is a likely indication that the much touted, rumored and leaked Xiaomi Mi 5S would be the main highlight of the September 27 event. Xiaomi is very well known for not coming out in clear terms to reveal a device’s launch date but rather the dates are usually announced by way of teasers. It is likely that other devices will be unveiled on that day alongside the Mi 5S.

The Mi 5S promises to usher in a new phase in mobile phone technology with the inclusion of the world’s first “Under Glass” ultrasonic fingerprint sensor technology pioneered by Qualcomm. The expected device will also feature a large improvement in other aspects over its Mi 5 predecessor.

Furthermore, the Mi 5s is expected to feature a double curved screen design with a 5.15-inch display capable of 3D Tounch functions. A Snapdragon 821 chipset clocked at 2.4GHz is likely to call the shots,l along with a 6GB RAM and a top most storage option of 256GB. On the camera end, the smartphone is expected with a 16MP rear camera with f/1.8 aperture, PDAF, four-axis optical image stabilization and LED flash. The device will also come equipped with a 3410/3,490mAh battery with Quick Charge 3.0, USB Type-C interface , dual-SIM slots, and most importantly, NFC.

Xiaomi is also rumored to be working on a Mi 5s Plus model and September 27 would possibly reveal if that is true.