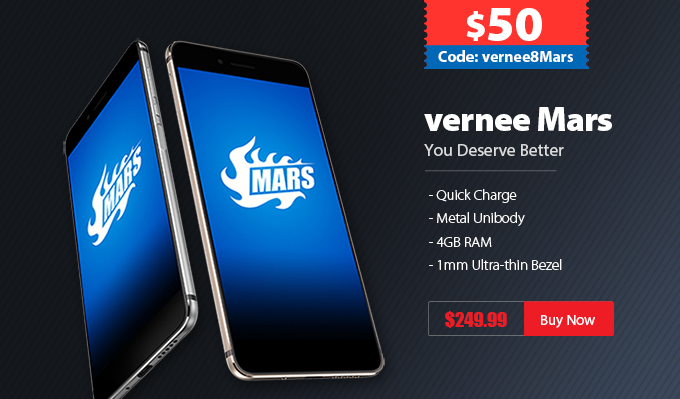 In August, we told you about the new Vernee smartphone Vernee Mars that was expected to launch in November and the good news is that the Vernee Mars is official now and is up for pre-orders. Vernee Mars is the third phone from the company and will have another variant called Vernee Mars Pro that will have 6GB of RAM, Helio P20 and other high-end specifications.

Vernee Mars adopts an arc antenna band similar to that of iPhone 7 and its metal back cover also features the same anodizing process of iPhone 7. Thanks to the fine polishing process and delicate color arrangement, Mars looks pretty gorgeous.

Finely grounded sides and corners also improve Mars handling experience to a great degree. Due to the CNC Nano Injection Molding process, Mars has over 98% metal coverage on the back and it is a truly all metal smartphone.

The Vernee Mars comes with a 5.5-inch display with 1mm super thin bezel and the screen-to-body ratio is nearly 80%. With the dimension of 151.6x73x7.6mm, Mars has relatively slim body, which is almost the same size of many 5-inch smartphones nowadays.

The Vernee Mars comes with a 5.5-inch FHD In-Cell display and is powered by a MediaTek MT6755 Helio P10 processor. It comes with 4GB LCDDR3 RAM and 32GB eMMC 5.0 internal storage capacity. It runs on the stock Android 6.0 Marshmallow OS out of the box.

The Vernee Mars is priced at $249.99 but the interested customers can buy it with exclusive $50 discount during the presale period. The Vernee Mars is available exclusively on Aliexpress e-commerce website and you can use the coupon code “vernee8Mars” to gt $50 discount. You can also pre-order the device from official Vernee website.