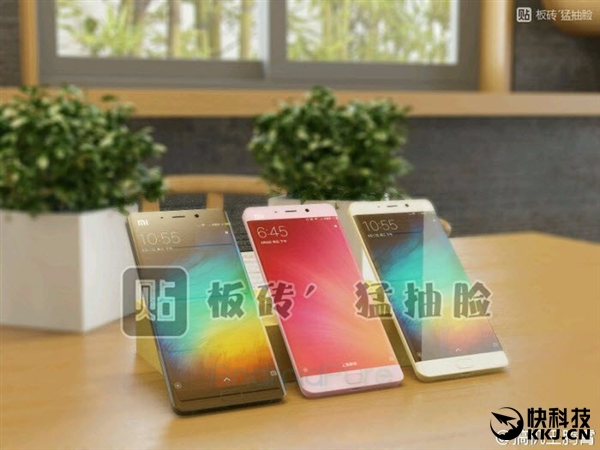 The Xiaomi Mi Note 2 seems to be close to being released, considering the spate of leaks and rumors surrounding the device of late. The latest leak we are having of the flagship device is that of some live images, displaying the beautiful design, color variants, curved display, body type and even the looks of the packaging box the Mi Note 2 will come in. Aside the looks and images, the key specs of the smartphone is also listed for our delight in one of the renders. Even though the device bears similarity to the ones we had seen in earlier leaks, this latest leak sure looks like nothing we have seen before because the devices on display look ready to storm the market.

The listed specifications of the Mi Note 2 include a 5.7-inch curved screen display with 2K resolution, an all metal body design with dual glass covering on both sides. The device will be powered by Qualcomm’s latest Snapdragon 821 processor, clocked at 2.4GHz and comes alongside two RAM size version – one with 4GB of RAM and a second version with 6GB of RAM. In addition to that, the Mi Note 2 will also come in three storage versions of 64GB, 128GB and 256GB of internal storages.

Furthermore, the entire smartphone comes with a dimension of 155 x 77 x 6.5mm, and crams a 4,000mAh battery under its hood, with Quick Charge 3.0 support. The Xiaomi Mi Note 2 is also listed to run on Android Marshmallow based MIUI 8 and would sport a dual camera set up at the rear.

This recent leak looks more authentic and is consistent with earlier ones both in the design and the specs line-up. The device is said to launch on September 14, according to earlier rumors but we are yet to get wind of the likely price tag.