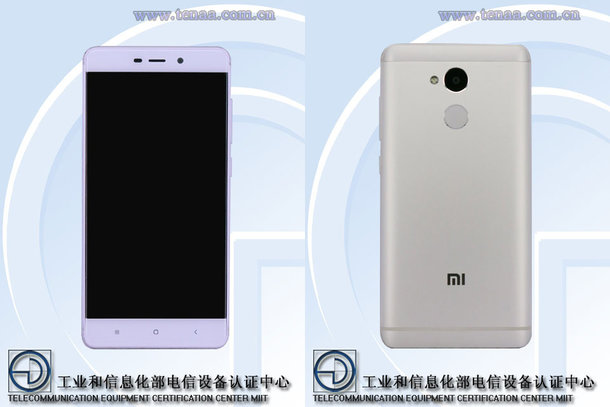 The unannounced Xiaomi Redmi 4 had earlier been spotted on the Chinese Telecoms Regulatory agency  TENAA’s website with model number 201606 but the photo renders of the device were conspicuously missing. However, the Redmi 4 has again been listed on TENAA, this time with images of the device attached with the listing.

We were able to confirm that this is likely the Redmi 4 because the listed specs tallies exactly with those earlier spotted on TENAA and indeed this one also has the same Model number 201606 as the earlier one. In addition, the renders look very much like the images leaked sometime last month. The device is listed to come in silver and gold color variants, so what we are seeing is likely the silver colored variant. The images shows the rear camera without any hump and underneat it there is a fingerprint sensor. Xiaomi’s trademark MI logo is also on the back and after that, a line of antenna band runs through the back on the bottom edge.

According to the TENAA listing the Xiaomi Redmi 4 features a 5-inch display with 1080 resolution and would be powered by a 1.8GHz processor which is suspected to be the MediaTek Helio P10 chipset. The device is also listed as having 3GB of RAM and 32GB of built-in storage . There’s also a 13-megapixel rear camera sensor and an 8-megapixel front camera. The suspected Redmi 4 is also listed to boot Android 6.0 Marshmallow out-of-the-box and will have a large 4,000mAh under its hood. Quite curiously, the device is also listed to feature infrared transmission in addition to Bluetooth and USB connections.

Since we had earlier spotted the Redmi 4 on benchmark app GeekBench and now the device has made its second appearance on TENAA, it is very likely that Xiaomi will launch the Redmi series smartphone anytime from now. We’ll keep you posted here on Timesnews.co.uk whenever that happens.