Xiaomi has today launched the Redmi 3s and Redmi 3s Prime in India, both sporting an interesting specs array. India happens to be a very important market for phonemakers largely because of the huge market and their growing economy. 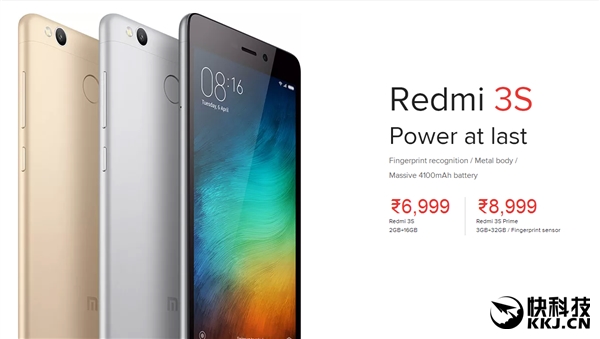 Thus launching the smartphones in the India market is seen as a strategic plan by Xiaomi in  its bid to diversify its smartphone sales outside China. The Redmi 3s released in India comes in two versions, a standard version and a high version both differing in the memory aspect.

The Xiaomi Redmi 3s that would sell in the Indian market has the same features as the one available in China. The phone has a metal body, 5-inch display with 720p resolution. The device comes powered by a 1.4GHz Octa-core Snapdragon 430 processor with Adreno 505 GPU. There is also the Android 6.0 Marshmallow-based MIUI 8 providing the interfacing and on the camera aspect, the Redmi 3s features a 13MP rear camera sensor with phase detection autofocus and LED flash. There is also a 5MP front facing camera on the device.

In the memory bank, the Xiaomi Redmi 3s comes in two versions, the base version which is equipped with 2GB of RAM, and 16GB internal storage which is expandable, and a high-end version which has a 3GB RAM and 32GB of internal memory also expandable. The high-end version sports a fingerprint sensor but the base version does not feature one. The Redmi 3s Prime only features 3GB of RAM and 32GB of built-in memory.