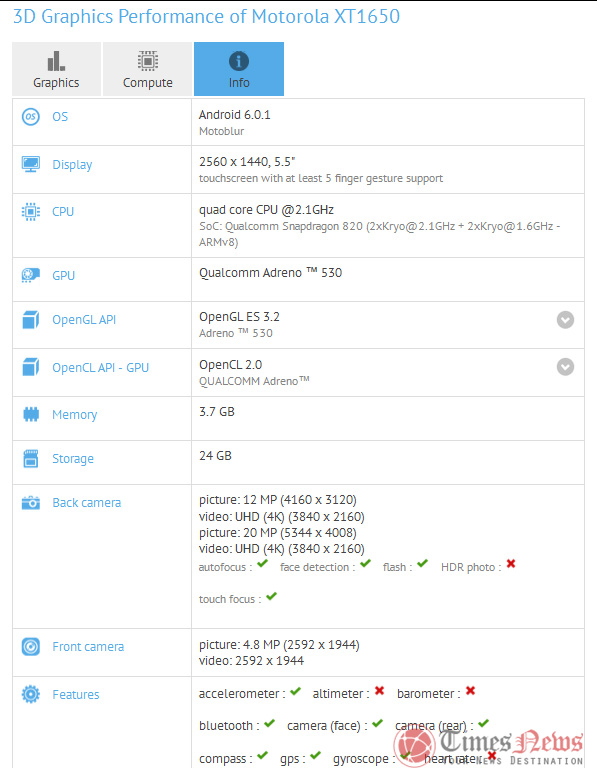 Now, this device carrying the model number Motorola XT1650 has made its appearance on the GFXBench listing as well confirming the rumored specifications once again. The GFXBench listing comes with more information on the specs. The Motorola XT1650 is listed on GFXbench with a 5.5-inch Quad HD display with 2560 x 1440 pixel resolution and is powered by the quad-core 2.1GHz Qualcomm Snapdragon 820 ([email protected] + [email protected] – ARMv8) processor with Qualcomm Adreno 530 GPU.

It runs on the Android 6.0.1 Marshmallow OS out of the box that is a pure stock Android operating system we are getting with the other Moto devices too. It has 4GB of RAM and 32GB inbuilt storage and it will also support expandable storage slot with MicroSD card. The camera module is interestingly showing a dual camera setup on the rear side with a 13-megapixel and a 21-megapixel dual rear cameras with both capable of recording 4k videos. It will also have a 5-megapixel front facing camera.

Other features includes Bluetooth, GPS, USB, single SIM, WiFi, NFC and couple of sensors as well. No other details are available in the GFXBench listing. The GeekBench listing previously confirmed that it will have a 1.59 GHz quad-core Qualcomm Snapdragon 820 processor along with 4GB of RAM. It runs on the Android 6.0.1 Marshmallow OS out of the box. It scored 2309 points in the single core test and 5344 points in the multi-core test. No other details were available in the GeekBench database listing.

If the above details about this device are real then the Moto X 2016 will be the first smartphone from Motorola to feature dual rear cameras. The Motorola Moto X 2016 will surely compete with the other devices with dual cameras like Huawei P9, LG G5 and others. Stay tuned for more news and updates about this upcoming Motorola device.