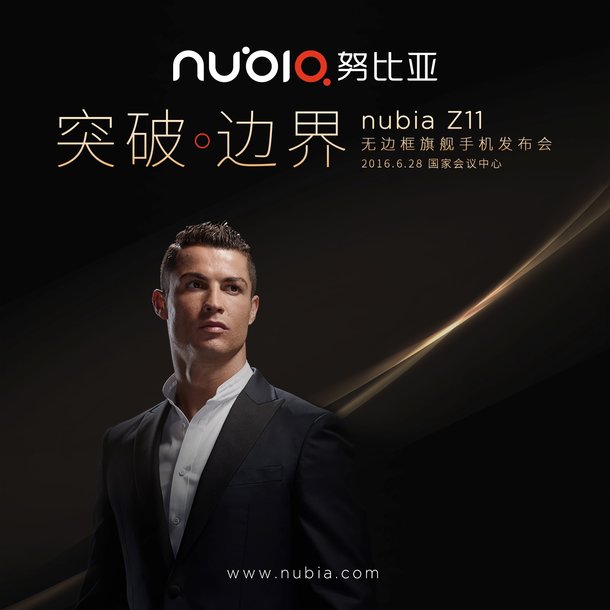 Nubia has recently launched the two of its new Nubia Z11 devices called the Nubia Z11 Max and Nubia Z11 Mini. Now, the company is all set to announce the main Nubia Z11 flagship on June 28 in an official event in Beijing at Beijing National Convention Center. The company has started teasing the device on their weibo account confirming the event date June 28 and Ronaldo will also be present in the event.

The Nubia Z11 has already got the TENAA certification with model number NX531J. The Nubia NX531J comes with a 5.5-inch TFT full HD display with 1920 × 1080 pixels resolution. It is powered by a 2.15GHz octa-core processor that might be the a Snapdragon 820 processor. It has 4GB of RAM and 64GB of internal storage capacity and up to 32GB expandable MicroSD card storage as well. It runs on Android 6.0.1 Marshmallow OS out of the box and will support single SIM option.

The TENAA listing for the Nubia NX531J doesn’t comes with the camera information but a new listing with model number Nubia NX541J confirms that it might be having a 13-megapixel rear camera with LED flash and a red ring with an 8-megapixel front facing camera. A 2900mAh battery backs up this device and connectivity options includes 4G LTE, Bluetooth, 3G, USB, WiFi and other features as well. It measures 151.8 × 72.3 × 7.75 (mm) and weights 165 grams. It comes with Silver, gray, gold, brown and pink color options.