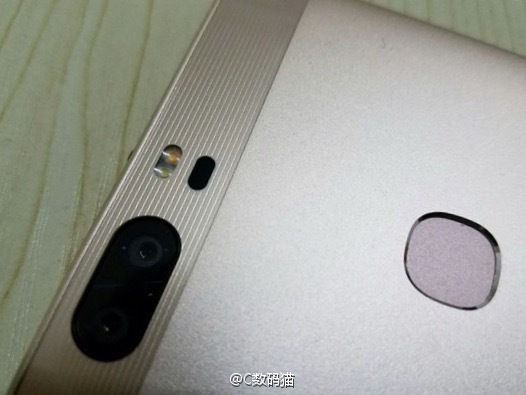 Huawei is going to launch its new Honor V8 smartphone tomorrow on May 10 event in China. We already the device leaked through the TENAA listing including the specifications and now some new leaked images of the Honor V8 have been spotted on weibo showing us the dual camera on the back. Both the leaked images are from the rear side of the device. On TENAA, the Honor V8 was listed with three variants listed with model numbers KNT-AL10, KNT-TL10 and KNT-AL20.

The first leaked images shows the dual camera setup on rear side along with the fingerprint scanner below the camera. The second image shows the full back panel of the device with a user playing with some other mobile on one hand and Honor V8 in his other hand. According to the rumors, the Honor V8 will be capable of taking the dynamic 360-degree photos.

On TENAA, the Honor V8 was spotted with three variants and the two variants KNT-AL10 and KNT-TL10 were listed with a 5.7-inch TFT full HD display with 1920 × 1080 pixel resolution and is powered by the 2.3GHz octa-core processor expected to be the Kirin 950. Both have 4GB of RAM and 32GB inbuilt storage capacity with up to 128GB expandable storage capacity. The device runs on the Android 6.0 Marshmallow OS out of the box.

It features a Dual rear camera of 12-megapixel with Dual tone LED flash and a front facing 8-megapixel camera. Connectivity options includes 4G LTE, 3G, WLAN, infrared, Bluetooth, USB, FM Radio and other standard connectivity options. It measures 157.00 × 77.60 × 7.75 mm and weights 170 grams. It is listed in Silver and Rose Gold color options. All the three device are backed up by the 3400 mAh battery.

The KNT-AL20 model was listed with an upgraded processor, display and inbuilt storage capacity with all other similar features just like the other two variants we discussed above. The KNT-AL20 comes with a 2.5GHz octa-core processor that is expected to be the Kirin 955. It has 64GB inbuilt storage capacity. It comes with a 5.7-inch TFT display but with QHD resolution of 2560 × 1440 pixels. Other features in this device are similar to the other two variants.