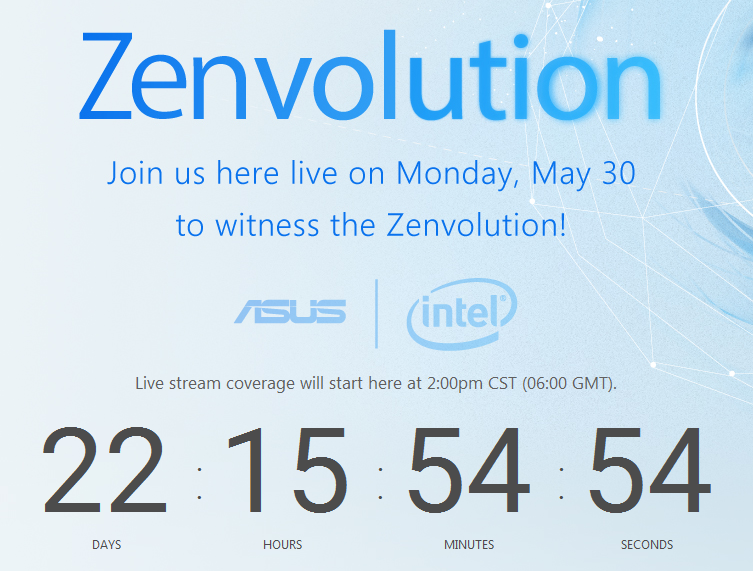 Asus has started sending the invites for its upcoming official event titled “Zenvolution” that is going to take place on May 30 in China. The company is expected to announce the third generation of the Asusu Zenfone series flagships. A live page for this event is setup by the company officials with a countdown timer on the official website as well. Live streaming will also be available for this event on the official website here.

The official event page also comes with the Intel brand which hints towards some Intel powered devices to launch as well in the official event. The company is expected to launch new smartphones as well as new ZenPad tablets, ZenBook laptops and a new ZenWatch as well. The companies are launching their VR’s too these days, so we may expect that Asus will launch a VR with some name like ZenVR in this event.

Talking about the new Zenfone 3 series devices, last month, the upcoming ASUS ZenFone 3 and ASUS ZenFone 3 Deluxe devices images were leaked on Reddot 21 website. The Zenfone 3 also got the TENAA approval revealing the specs and images of the device. Two new Asus device with names Asus Z010DD and Asus Z012D were also spotted at GFXBench database listing some key specs.

The TENAA listing comes with specs like a 5-inch 720p IPS display with 1280×720 pixel resolution. It is powered by the quad-core 1.2GHz processor with 2GB of RAM and 16GB of inbuilt storage and microSD storage expansion up to 32GB. The device features an 8-megapixel rear camera with a dual-tone LED flash and a 5-megapixel front facing camera as well. It runs on the Android 5.0.2 OS out of the box. It measures 143.7×71.5×10.66 mm and weights 145 grams.

On GFXBench, Asus Z010DD was spotted with two variants, one with 5.5-inch display and the second with 5.9-inch display with both having HD resolution of 1280 x 720 pixels. Both were powered by a octa-core 1.5GHz Qualcomm Snapdragon 615 processor with Adreno 405 GPU and 2GB and 3GB RAM options. Both have 32GB inbuilt storage capacity and runs on Android 6.0 and Android 6.0.1 marshmallow OSs. Both features a 12-megapixel rear and a 5-megapixel front facing camera.