Nexus 7 And Nexus 10 Getting Android 4.4 KitKat Update From Today 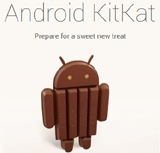 Google has announced that they are going to update Nexus 7 ( for both 2012 and 2013 hansets) and Nexus 10 with new Android 4.4 KitKat Update from today onwards.

So keep checking your Nexus 7 and nexus 10 tablets for this new update and getting the taste of this new Kitkat. Just go to software update option in settings menu in your tablet to get your tablet updated to this new release.

Earlier in another post, Google have also announced that Nexus 4 and Nexus 7 versions with mobile data will also be getting this update soon.

New Android 4.4 Kitkat have number of improvements and new features. You don’t need to touch the screen to get things done, just say “Ok Google” to launch voice search. There will be faster multitasking in the new Android 4.4 improving your touchscreen so that it responds faster and more accurately than ever before. Another feature is a smarter caller ID, Whenever you get a call from a phone number not in your contacts, your phone will look for matches from businesses with a local listing on Google Maps.

There will be many other exciting new features in this version of Android. So what are you waiting for? Just check your tablet for the update and taste the new Kitkat now!