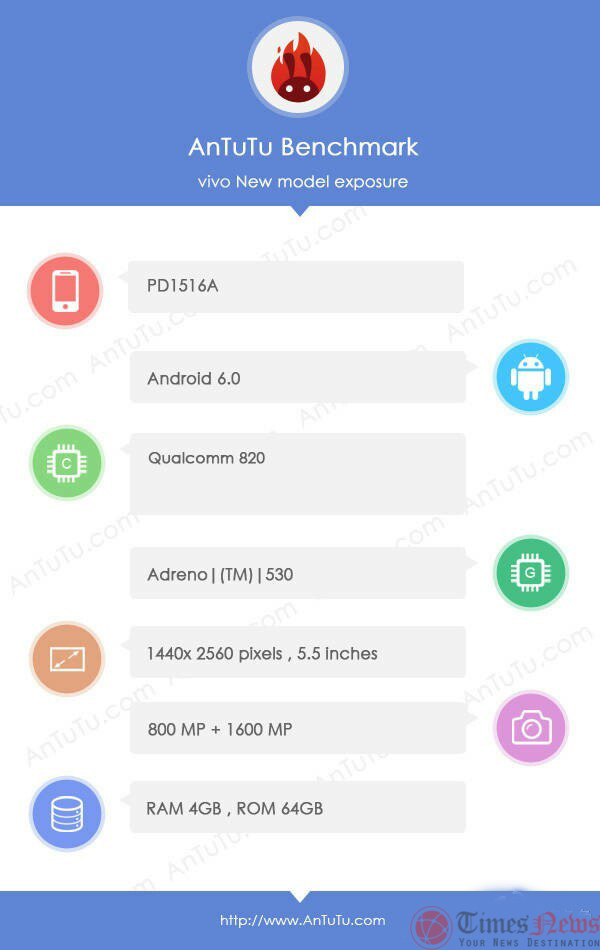 A couple of days ago, we told you about a new Vivo smartphone Vivo X6s Plus that got the TENAA approval and all the important specifications of the device got leaked along with images of the device. Now, the two new Vivo devices including the Vivo X6s Plus and the Vivo Xplay 5S has just appeared in the AnTuTu benchmarks confirming the specifications of both the smartphones. The Vivo Xplay 5S comes with code-name PD1516A and the Vivo X6s plus comes with code name PD1515BA.

The benchmark details for the Vivo Xplay 5S includes a 5.5-inches 2k display with 1440×2560 pixels resolution. It is powered by the latest Qualcomm Snapdragon 820 SoC along with Adreno 530 GPU. It comes with 4GB of RAM and 64GB of inbuilt storage capacity. The device runs on Android 6.0 Marshmallow out of the box. It features a 16-megapixel rear camera and an 8-megapixel front facing camera. No other details are available in the AnTuTu benchmark for Vivo Xplay 5S.

The Vivo Xplay 5S is previously rumored to have a 6-inch display with 4k support and 3840 x 2160 pixel resolution. It was rumored to be powered by a Qualcomm Snapdragon 820 with 4GB of RAM and 64GB inbuilt storage capacity. Other rumored specs includes a 21-megapixel rear camera and a 12-megapixel front-facing camera with a large 4,000mAh battery. So, except the screen size and 4k display rumor, everything else is matched with the previous rumors.

The AnTuTu benchmark revealed that the Vivo X6s Plus will have a 5.7-inch OLED display having a screen resolution of 1920 × 1080 pixels. It features a 16-megapixel rear camera and an 8-megapixel front facing camera. Other specs listed in the AnTuTu benchmark includes Android 5.1.1 Lollipop, 4GB of RAM and 64GB of inbuilt storage. All the above specs matches with the specifications revealed by the TENAA listing a few days back. TENAA listing also revealed that it will have an unknown 1.8GHz octa-core processor that is now revealed by the AnTuTu benchmark and will be the 1.8GHz octa-core Qualcomm Snapdragon 652 processor with Adreno 510 GPU.

Now we are just an announcement away for the full details of these two devices that may be around the corner as the MWC 2016 is just a month away from now. Vivo may be looking to launch these two devices in this event. Stay tuned for more updates and news.