HMD Global to announce new Nokia phones on February 26th, Nokia TA-1003 at WiFi might be the global variant 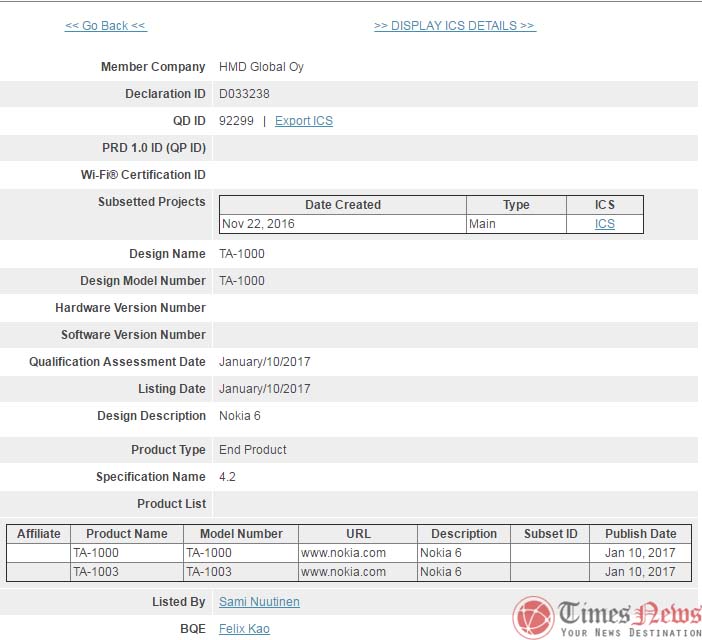 Nokia launched their first Android powered smartphone in the mid-range category at the CES 2017 event called the Nokia 6 that is up for pre-orders in China and will go on sale next week in the country on January 19th via JD.com. The company also confirmed that more announcements will follow on 26th of February just before MWC 2017 event. In a Facebook page post, the company posted ,”Get ready! The Nokia 6 is coming to China! More announcements to follow on February 26th… Save the date!” along with the video of the Nokia 6 smartphone.

We don’t have any information regarding what the company will announce at the MWC event but we can expect new smartphones and the Nokia 6 Global debut at the official event. The company is expected to launch the global variant of the Nokia 6 with model number TA-1003 that has got the WiFi approval now. The TA-1000 will be the Chinese variant of the smartphone that has already been launched for Chinese market. More details will be available next month at the launch event of the device.

It gets powered by a 3000mAh non-removable battery that can deliver standby time of 32 days and maximum 3G talk time of 18 hours. It comes with connectivity options includes 4G LTE, WiFi 802.11 b/g/n, Bluetooth 4.1, GPS, USB 2.0 and USB OTG. It also comes with a fingerprint sensor on the physical home button on front panel and also comes with additional features like 3.5mm audio jack, up and down dual speakers and smart amplifier chip (TFA9891) with Dolby Atmos. It measures 154 x 75.8 x 7.8 mm.