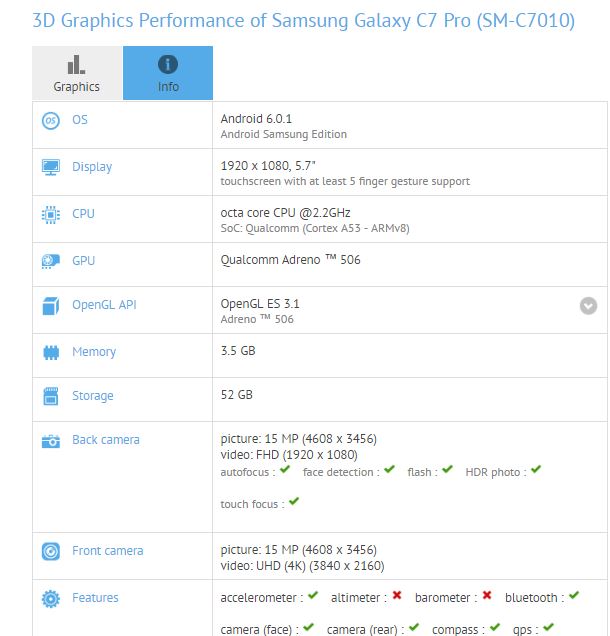 Samsung is soon going to launch the variant of the Samsung Galaxy C7 called Galaxy C7 Pro that comes with model number SM-C7010 and have been spotted in Geekbench and AnTuTu benchmark listings revealing some of the specs. The device is yet to hit TENAA that will leak its all specifications and images as well. The Galaxy C7 Pro is now listed by another benchmark website GFXBench confirming some of the key specifications again. Let’s checkout the specs we spotted at GFXBench listing now.

At GFXBench, the Galaxy C7 Pro is listed with SM-C7010 again and comes with a 5.7-inch full-HD display with 1920 x 1080 pixel resolution and is powered by the 2.2GHz octa-core Qualcomm Snapdragon 626 (Cortex A53 – ARMv8) processor that comes with Adreno 506 GPU. It has 4GB of RAM and 64GB of inbuilt storage capacity. It runs on the Android 6.0.1 Marshmallow OS out of the box. It features a 16-megapixel front and 16-megapixel rear camera.

At AnTuTu, the Galaxy C7 Pro was spotted listed with a full-HD display having 1920×1080 pixel resolution. It runs on the Android 6.0.1 Marshmallow OS out of the box and is powered by a 2.2 GHz Qualcomm Snapdragon 626 processor with Adreno 506 GPU. It comes with 4GB of RAM and 64GB inbuilt storage capacity. It features a 16-megapixel rear camera with LED flash and a 16-megapixel front facing camera.

At Geekbench, it was listed with Android 6.0.1 Marshmallow OS out of the box and is powered by a 2.21 GHz octa-core Snapdragon 626 processor with Adreno 506 GPU. It comes with 4GB of RAM and the device scores 1000 points in the single-core test and 5679 points in the multi-core test. No other specifications of the device are currently listed at Geekbench that might be available soon from its TENAA listing.