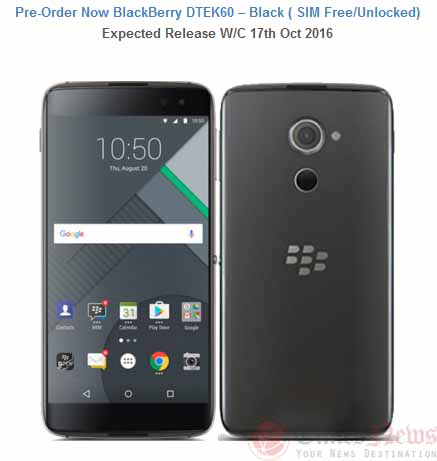 Blackberry is yet to launch its flagship Android powered smartphone Blackberry DTEK60 officially and we have already seen its online listings by online retailers in US, Canada and now in the UK as well. A UK based retailer Handtec has now listed the device with all the specs and images and also confirms the expected release date of the device as 17 October, 2016 in the UK in a blog post. It is listed with a pre-order price of £449.99 in the country which looks higher than its Canadian and US pricing where its priced at CAD 699.99 and USD $499.99, respectively.

The DTEK60, as we discussed a number of times previously, comes with a 5.5-inch AMOLED quad-HD Anti-Scratch display with 2560 x 1440 pixels resolution and 534 ppi pixel density. It is powered by the 64-bit quad-core Snapdragon 820 processor with Adreno 530 GPU. It comes with 4GB of RAM with 32GB internal storage and expandable storage up to 2TB with microSD card. It runs on the Android 6.0 (Marshmallow) OS out of the box.