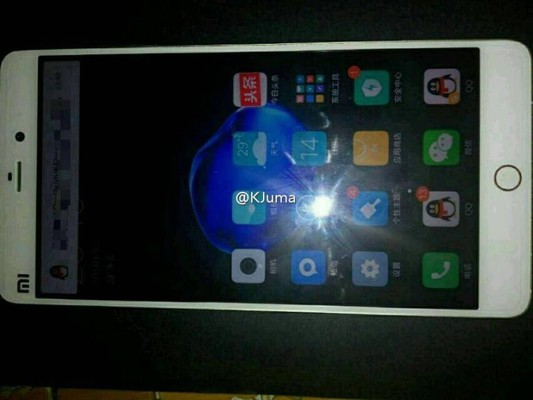 We’ve all been waiting for this, anticipating to see what the Xiaomi Mi 5s looks like in real life and here it comes. The much touted Mi 5s has surfaced online in a leaked photo on  Weibo. While we cannot be 100% sure this is actually the Mi 5s, we can at least take it with some seriousness considering it emanated from a popular tipster @kjuma.

The leaked Mi 5s photo doesn’t reveal a device with a unique design but keeps same shape as the Mi 5. However, the shape of the home button seem to have been modified on this one. The Mi 5 featured an home button that is oblong in shape but the Mi 5s render reveals a round shaped design on the home button, just like that of the Apple iPhone models. The button doesn’t look like it is protruding out of the screen but fused into the display screen, an indication it could be a virtual button as earlier rumored. Recall that the home button is rumored to also house the under glass ultrasonic fingerprint sensor that is said to work even when the fingers are wet.

The Xiaomi Mi 5s was spotted on ANTuTu’s official Weibo page earlier on and we got some details about the device. The AnTuTu listing revealed the device will come with a 2.15GHz Snapdragon 821 processor alongside an Adreno 531 GPU and Android 6.0 Marshmallow OS, which would likely be embellished with MIUI 8. Also, the Mi 5s will  sport a 5.15-inch display with 1080p resolution and Force Touch.  The device is also rumored as having three versions with 3GB RAM with 64GB storage, 4GB RAM alongside 128GB of internal storage and a top-end version with 6GB RAM and 256GB of internal storage.

On the camera end, the Mi 5s is rumored as sporting a 16-megapixel rear sensor with a 4-axis OIS, PDAF, and an aperture of f/1.8, and the front-facing camera is said to be an 8-megapixel shooter. The Mi 5s is said to cram a 3490mAh battery under its hood.

No word yet on the expected launch date of the Mi 5s but the device is expected to pop any moment from now.