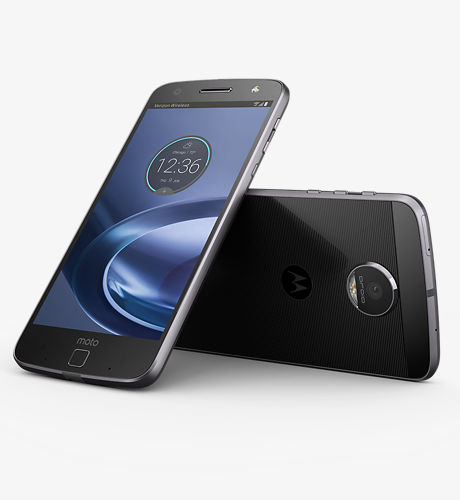 Motorola’s latest flagship devices Moto Z Droid and Moto Z Force Droid, that are the US variants of the Moto Z and Moto Z Force, are now up for pre-orders in the United States. Verizon is exclusively accepting the pre-orders and both the flagship devices are also listed on official Motorola US website. Both the devices are listed on official Verizon website here and here and will be available for sale starting July 28 on Verizon. Moto Mods are also available for sale with the flagships.

The Moto Mods are also listed on both Motorola and Verizon websites with prices. The customers can avail 40% discount on every second Mod they buy. The Insta-Share Projector costs $299.99, the JBL’s SoundBoost Speaker costs $79.99, the Power Pack costs $59.99 and some TUMI power banks also available priced between $59.99 to $89.99.

To recall, the Moto Z Droid comes with a 5.5-inch Quad HD AMOLED display with Corning Gorilla Glass protection and 2560 x 1440 pixels resolution. It is powered by a 2.2GHz quad-core Qualcomm Snapdragon 820 processor with Adreno 530 GPU and has 4GB LPDDR4 RAM. It has 32GB / 64GB internal storage options with expandable storage up to 2TB with microSD card. It runs on Android 6.0.1 (Marshmallow) OS and supports single-SIM options only.

It features a 13-megapixel rear cameras with dual-tone LED flash, OIS, Laser Autofocus, 1.12um pixel and f/1.8 aperture. A 5-megapixel camera with f/2.2 aperture and Wide-Angle lens is available on the front. It is backed up by a 2600mAh battery with Turbo charging feature enabled. Connectivity features includes 4G LTE (Cat 9) / 3G, WiFi 802.11 a/b/g/n/ac 2.4 GHz + 5 GHz with MIMO, NFC, front-ported loud speaker, 4-Mics, Moto Mods connector and Water repellent nano-coating. It comes with a USB-C port for headphones, charging and data access and there is no 3.5mm headphone jack available. There is  a fingerprint scanner available embedded on the physical home button. It measures 153.3 × 75.3 × 5.19 mm and weights 136 grams.

The Moto Z Force Droid comes with a full metal body and Moto ShatterShield display with a 5.5-inch QHD AMOLED Shatterproof Corning Gorilla Glass display with 2560 x 1440 pixels resolution. It is powered by a 2.2GHz quad-core Qualcomm Snapdragon 820 with Adreno 530 GPU and 4GB of LPDDR4 RAM. It also has 32GB / 64GB internal storage options with expandable storage up to 2TB with microSD card. It runs on Android 6.0.1 (Marshmallow) and supports single-SIM option.

It features a 21-megapixel rear camera with OIS, Laser Autofocus and f/1.8 aperture and also comes with a 5-megapixel front-facing camera with f/2.2 aperture and wide-angle lens. It also has a fingerprint scanner embedded on the home button. It is powered by a 3500 mAh battery instead of the 2600 mAh battery found in the Moto Z. The battery again comes with the turbo charging feature.  It measures 155.9×75.8×6.99 mm and weights 163 grams. Other features are same as the Moto Z we discussed above.